What I’ve Learnt As A Songwriter

Songwriting changed my life. When I was young, I was overly-critical and judgmental about the music I listened to. Much of “my” music wasn’t of particularly high quality (musically, lyrically, or otherwise), but I thought I had a good grasp on life, because I was young and dumb. This “good grasp” carried into other areas of my life, where I felt I was sufficiently informed, capable, or what-have-you. Essentially, the pride of youth was in full swing, and it was especially noticeable in my approach to music. I thought, if it didn’t worship God outright, then I shouldn’t listen to it. But I wasn’t actually caring about God’s glory or His holiness. I cared about the perception of MY holiness.

Then, around age 16, I wrote my first song. I’d been playing guitar for about a year, and singing since I was able to talk, and decided that it was high time I made my mark on music by writing some myself.

I thought long and hard about what I would write, and after a solid twenty-three seconds or so, I decided to write a praise song. After all, if it’s about God, then it’s not actually about me.

The song I proceeded to write mentioned God by name maybe two or three times. It used pronouns like “I” and “me” dozens of times. In fact, looking back, the song was fully focused on my action of praising God, instead of the reason and worthiness for which He was being praised. I had successfully written a praise song about myself. And I was so proud of it.

I literally recorded it on a tape-player, and went around to my entire family, “I wrote a song! I wrote a song! Listen to it!” As if what I had just created was going to fill the voids in their lives and make them complete. Obviously, they were missing something in their existences: my song. And, with enduring love and patience, they muscled their way through my screechy vocals, pathetic guitar, and self-focused lyrics poorly-masquerading as praise to God. What champs!

Most of my early songs followed a similar pattern—l wrote for my own glory, to put attention on myself, and tried to mask it all by saying it was about God. This was a pattern that took years to break, and the Lord graciously broke it before I even identified it. Somewhere along the way, God taught me how to truly listen to music, how to truly write for His glory, and what a worship song really is.

History and culture tell an interesting story. Rather, they tell many stories. From the first mention of music in Genesis 4, to the most recent Top 40 in America, India, Japan, and Venezuela, music and culture are nigh inseparable, and they follow their own course and aesthetic in their own respective communities.

It took me years to realize the subjective nature of musical aesthetics, especially in relation to praising God. It finally was summed up when I asked myself this question: “when David wrote, played, and sang the Psalms, what did they actually sound like?” Certainly, he wasn’t singing “The Lord is my shepherd, I shall not want” to the tune of A Mighty Fortress Is Our God. So, what was the accepted aesthetic then? Inconsequential, that’s what.

Many fundamental Christians in the Western world say that drums are inappropriate for worship. Yet Psalm 150 clearly prescribes (nay, commands!!) percussion as a component of worship. Consider also this other question: what would Jesus sing? No seriously! It definitely wasn’t an Isaac Watts tune, so music is clearly an area where many have allowed tradition to overtake their better judgement regarding the Word of God and His worship.

(Note: this does not mean that all musical aesthetics are always appropriate for all people to worship to. Log this away as the same basic concept as “food sacrificed to idols.”)

When it comes to the basic practice of writing songs, nothing has taught me more than listening. I don’t mean listening to music or other lyrics (though that is helpful), but rather, listening to the people around me. Engaging in conversations, listening carefully in a lecture or a sermon, listening to strangers (yes, I spy sometimes) in public (they choose to talk that loudly), and most of all, reading my Bible and “listening” to God.

When you talk to others, you begin to pick up on the general way people phrase things. This can help you know how to phrase lyrics, poems, or prose most effectively. That doesn’t always mean copying how others say it; sometimes breaking the expectation is far more effective than meeting it.

I cannot begin to say how many speakers and pastors I myself have personally ripped off for a good phrase or concept. And that’s just me! But, by far, one of the surest ways to find a good idea for a song is to listen to sermons and lectures. The most adept at making ideas beautiful in the first place are professional speakers, not songwriters. Find a well-spoken preacher, grab your notebook, and settle in!

More than once I have been settled in at a restaurant, at a theater, or some other public place, and somebody will be talking loudly. They’re too loud to filter out, so their conversation immediately becomes lyric-fodder. I have, in fact, written portions of songs based on what I heard a stranger say on the phone in public. You just never know what gems you’ll find!

And speaking of gems, the most valuable resource for the Christian songwriter also happens to be the most valuable resource for the Christian, period. The Holy Bible. Start in the Psalms. And read multiple translations. Make sure to really understand the message of the passage. An old writing exercise I used to do was to read through the Psalms, and to try and turn each one into a brand-new song. If I changed the order of presentation, or the meaning behind the message, then I had to start over. Certainly, the Word of God is a treasure trove of lyrical inspiration for the Christian songwriter.

The Bible sets our standard, as well as provides us with a literal litany of literary ammunition to throw at the music we shape. However, it is when we venture into the pages of Scripture that we begin to take a risk that too few Christian songwriters consider. We run the risk of using God’s Word. The Bible can cease to be a source of personal, communal, and universal sanctification, and can become the “Big Book of God-song Scraps.” We start treating it like we do a dictionary or thesaurus, and only crack it open to help with our next writing project. Eventually, we can stop being remade by it, and begin to remake it to our own aesthetic. The Bible is certainly a convenient source of Christ-like-sounding material and phrases and concepts, however, to use it in such a way is dishonoring to God. This can lead to a multiplicity of other sins, but I’ll let you consider those on your own. 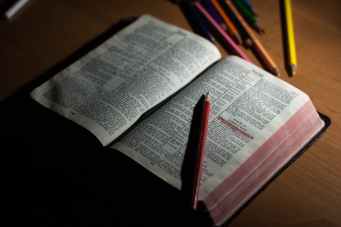 Secondly, the Bible actually is a wonderful source of literary and lyrical inspiration. As long as care is taken to approach it reverently, and not as a simple “user,” then it can be extremely profitable both artistically and spiritually to write directly from the Bible.

Thirdly, and lastly, the Bible is what sets the tone and direction of our worship; it informs us as to Who we are worshiping, why we are worshiping, and in many ways, how we are worshiping. We worship a thrice-holy God, for His matchless glory, through the grace and enabling of the Holy Spirit. If those three things are in place, then everything we do, we can do as an act of worship.

Worship doesn’t begin when the first chord is struck, because worship never ends. It is a lifestyle, a continuous mode of living, which we are commanded to maintain. It is not dependent on music, talent, or desire, because even those who do not wish to glorify God will glorify God. It is important that we understand that worship isn’t a music and arts thing, it’s a theology thing. We worship because of Who God is. We worship because He is without equal. We worship, simply because, He is worthy.

Thank you for visiting the RAIN Drop, your source for news in the world of Reformed Christian art, music, and writing. We are here for the little guys, with interviews, artist spotlights and announcements, church and pastoral articles, and more. So come be edified and inspired, one drop at a time.